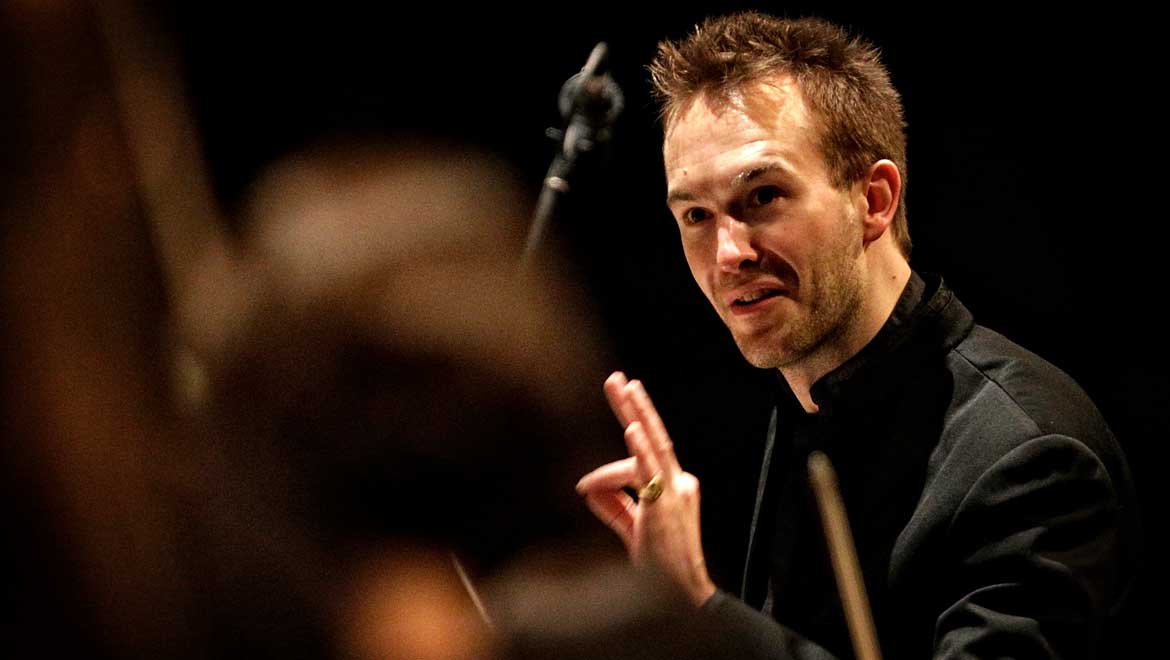 Born in Jamaica, with Russian ancestry, Andrew Gourlay grew up in the Bahamas, Philippines, Japan and England. A trombonist and pianist by training, he studied conducting at the Royal College of Music, where he prepared Bruckner symphonies for Bernard Haitink and Mozart symphonies for Sir Roger Norrington. He was selected by Gramophone magazine as their ‘One to Watch’, and by BBC Music Magazine as their ‘Rising Star: great artists of tomorrow’.

Andrew Gourlay won First Prize at the 2010 Cadaques International Conducting Competition, securing concerts with 29 orchestras around the world. For the next two years he was Assistant Conductor to Sir Mark Elder and the Hallé Orchestra. In 2015 Gourlay took up the position of Music Director of the Orquesta Sinfónica de Castilla y León (OSCYL), having been their Principal Guest Conductor since the 2014/15 season, and celebrated the orchestra’s 25th anniversary in 2016/17.

Recent guest engagements include conducting the Philharmonia, the BBC orchestras, London Philharmonic,  RLPO, Hallé, CBSO, Opera North, RTÉ Symphony, Ulster Orchestra, Melbourne Symphony, Auckland Philharmonia, Rotterdam Philharmonic, Antwerp Symphony, Bremen Philharmonic, Stavanger Symphony, Norrköpping Symphony, Tampere Philharmonic, Orchestre National Bordeaux Aquitaine, Orquesta Sinfonica de Chile, Australian Youth Orchestra, orchestras throughout Spain and the London Sinfonietta at the BBC Proms. He made his US debut in 2016/17 with the San Diego Symphony Orchestra and returned to the USA in 2018 to conduct the Fort Worth Symphony Orchestra. He returned to the Proms in 2018 to conduct a special concert in celebration of the 40th anniversary of BBC Young Musician.  Guest engagements since 2020 include a visit to the Enescu Festival with the Britten Sinfonia, and concerts with BBC NOW, BBC Scottish Symphony, London Philharmonic, Royal Philharmonic, Britten Sinfonia, London Sinfonietta, Belgian National and Tampere Philharmonic Orchestras.  He returns to the Proms in 2022 with the National Youth Orchestra of Great Britain.

Operatic engagements have included the UK premiere of Luca Francesconi’s Quartett for the Royal Opera House. He has conducted Rusalka and La Tragédie de Carmen for English Touring Opera, and The Marriage of Figaro at the Benjamin Britten International Opera School. In 2015 he conducted Tippett’s The Ice Break to great critical acclaim in a new production by Graham Vick for Birmingham Opera Company and the CBSO. He conducted Huw Watkins’ In the Locked Room with Britten Sinfonia in Wigmore Hall in November 2021 and returns to the Aldeburgh Festival in June 2022 to conduct the world premiere of Tom Coult’s  opera Violet.

Andrew Gourlay has conducted recordings with the London Symphony Orchestra, Irish Chamber Orchestra, Royal Liverpool Philharmonic Orchestra, Britten Sinfonia, BBC Symphony, and BBC National Orchestra of Wales. The first own-label OSCyL disc of Rachmaninov’s Symphony No 2 and The Isle of the Dead was released in spring 2019 to critical acclaim, and has been followed by Shostakovich 10 in 2021.